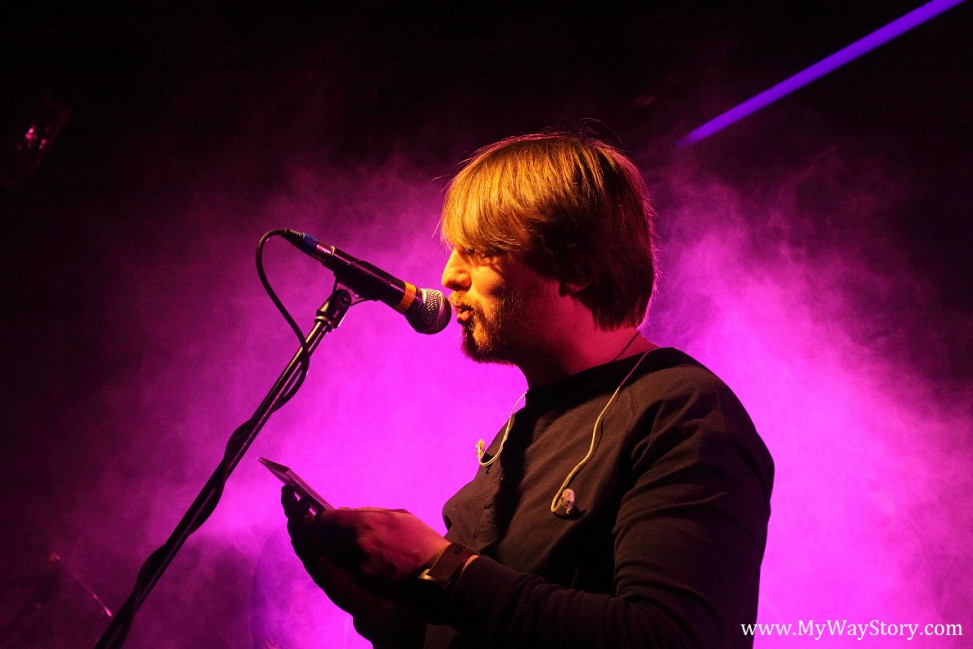 My Way Story about us

Convinced that you need to broaden your horizons and all horizons. Including in music. About ten months I honestly tried to go and hear live personal discovery of last year – the pilot team BlockBASSter. In July I was lucky enough to attend a solo performance of the band leader, trumpeter and film composer Anton Silaev, in a concert at the “Worker and Kolkhoz woman” under the open sky, with views of the evening Moscow. In the unusual atmosphere impressed and absolutely gorgeous music, and a radiant Anton, and video art his colleagues Tamara Zubova, and his friendly support team. But working with BlockBASSter deserved special attention, and the reason for the familiarity was a concert on 14 March at the club “16 tons”. The musicians presented the Kalmyk soundtrack to the film “The Gulsl” Ella Manzheeva, “Best debut” at “Kinotavr-2015”.

To see a film until I had the opportunity (although now I’m just going to look for it), and it is therefore impossible to assess the result of done of the composer’s work in General. In terms of how well it fits in with the story line and cinematic moves. My experiences relate directly to the music created by Anton and already played for team BlockBASSter alive. And it’s not only the soundtrack, but also original compositions “Ballad”, “Organic” and others that are created specifically for BlockBASSter. By the way, in the recording of the soundtrack had not used the pipe relative to the main tool in the Arsenal of Anton Silayev. But there you can hear the sounds of the fans, sander, hammers and bottles, Tibetan singing bowls, unusual wind instruments (didgeridoo, kaluka, argul), as well as percussion, including the so-called wah-wah tube (can’t call analogue in Russian).
I must say that the story BlockBASSter beautiful from all sides, and to take it apart into individual components is very difficult. Although it is through the details and interesting finds so fascinating she becomes. Remember the awesome Swedish-French film “Sound of noise”, where the music was written by the most trivial means, and concert venue had been operating, Bank, city street. And Anton Silaev collects musical fabric of natural sounds – torn paper, punches on a variety of items, banging on a typewriter and the like. Of course, this is not a unique method of creating music, especially for film. And in these times of play and on vegetables, and on the garbage cans, and on the toothbrushes, there is even the body of the beer bottles. But to call it creativity in the highest sense of the word, I think, only when the imagination of a composer works not for shock value, and the result, the achievement of a certain effect of sound, including the full composition. Actually for the sake of art.

BlockBASSter is excellent in that it is an experiment from the very beginning, the attempt by Anton to use the skills in cinematography in a live concert the sound, to expand their own creative boundaries. And, in my opinion, the whole team do it successfully. The band’s music is born from the wealth of sound content, a custom set of tools, genre diversity, spectacular visual design and absolute influence of the cinema. Slow, almost meditative compositions is replaced by heavy artillery, juicy pipe leads the dialogue with a gentle flute, then attention is increasingly concentrated powerful bass tuba and echoed her double bass and percussion. The most succinct and appropriate word for what happens on stage is the atmospheric pressure. Listening to the music of BlockBASSter, you are completely open to the images that draws your own imagination. And this is probably a huge advantage talented instrumental groups vocal before those in whose repertoire is initially structured verbal story. In order to experience the emotional power of the team BlockBASSter, you should still go to the concert yourself. And to begin acquaintance with the works of Anton and his colleagues without leaving your home. At least turned to their music and watch photos from the last presentation.